Round 1 – Stop the Shooter Chase

Round 3 ? Card Scrambler Then Shoot

Tally the points from all three rounds and reward the winning team with a prize.

The following are two diagrams that show how to adapt Round 1 and Round 3 of the
?March Madness Baby! ? In the Gym? game for larger groups. The diagrams were
mapped out for three teams, up to 30 people. Please forgive the ?chicken scratch?.

—Click on the thumbnail images below to see the diagrams full size. 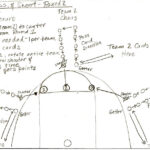 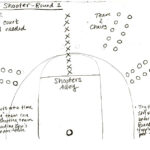