This page has been formatted for printing.

Prepare a snapping turtle trap: Pound nails into a two-foot-long piece of board at three- or four-inch intervals. Bend the head of each nail at a 90-degree angle (see the illustration). If it is not feasible to prepare this trap, draw a picture of it on the chalkboard, [like this:] 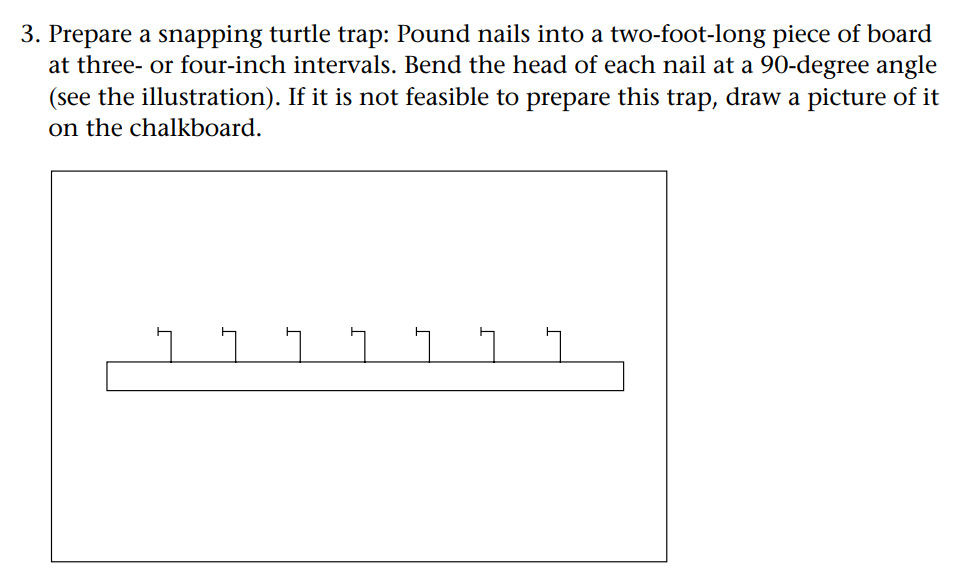 Display the snapping turtle trap (or refer to the drawing on the chalkboard).

After class members have had a chance to respond, explain that it is a trap to catch snapping turtles. Give the following information in your own words:

Delicious soup can be made from the meat of snapping turtles. However, these turtles are very smart and very mean, so they are difficult to catch. When they are in the water, they can use their beak-like mouths to steal the bait used to lure them without even touching the hook holding the bait. In the water they are safe and in control. If you can lure them out of the water, however, they are easier to catch.

Hold up one end of the trap so that the bent nails are pointing upward.

If you put raw meat on the top of this trap and set the bottom end of the trap in the water, the turtle will smell the meat and climb up the trap to eat it. When you move toward the trap, the turtle, sensing danger, will pull into its shell and try to slide back into the water. But its shell will catch on one of the nails and it will be stuck. Then you can take it home and make it into turtle soup.

Explain that a man who fished for snapping turtles compared the turtles' safety in the pond to our safety in the gospel. Then he made the following statement:

"Television, movies, magazines, and other media of our day scream out that good times are associated with immorality, alcohol, and violence. Some seemingly good kids in your school may smoke marijuana and use drugs. The attractive young men and women in beer commercials seem to be having fun.

"It's bait. Just like the smelly meat on the plank in my Georgia pond, this bait can be used to trick and betray you. If we allow ourselves to be tricked into leaving the safety of the Church and gospel, we may also be trapped. You simply cannot afford to take the risk of becoming turtle soup!" (Ron Whipple, "Catch a Snapping Turtle," New Era, July 1996, 26–27).

• Why does a turtle climb up on the trap?

Point out that the turtle is seeking something desirable—food. In other circumstances, it would be good for the turtle to eat the food. In this case, however, the food is being improperly offered, and it results in death to the turtle. Similarly, sexual pleasure is not inherently bad, but when sought in
the wrong circumstances—in any situation outside of marriage—it becomes destructive and can result in spiritual death.

Explain that when Satan designs bait to lure us into improper behavior, he is very subtle. He does not begin by immediately tempting us to commit serious sins. Instead, he tempts us into seemingly innocent thoughts and activities that can easily lead to more serious sins (see 2 Nephi 28:8, 20–22).
• What are some kinds of bait that Satan uses to lure us into immorality? (Answers may include immodest clothing, unclean movies or television
programs, dirty jokes, and immoral music.)