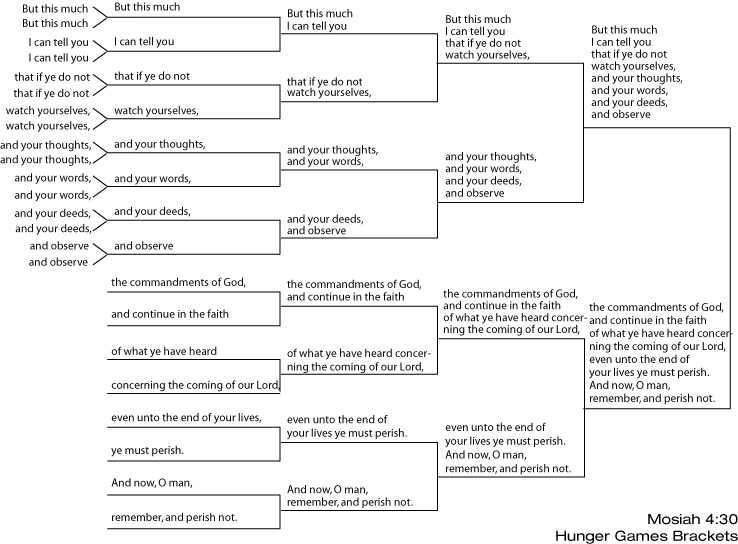 This super fun game was written by a Seminary student for his class.  Here are some notes on how to play it:

We had a student plan an amazing week of scripture mastery activities. Yesterday it was hunger games themed on Mosiah 4:30. Their battles were rocks, paper, scissors. The person who lost had a dramatic death scene. One was victorious. Here is how it was set up. Each person started out with one slip of paper that they grabbed from a cornucopia in the center of the room. They had to battle with the person who had the next part of the scripture mastery. …

They battled using “rock paper scissors”. The game only took about 10 min which is what we allow each day.

And here’s how I did it:

We played this today, and it was super fun. We are also adding in thumb wrestling and other games so it’s not all rock, paper, scissors.

Before class I taped a very rough cornucopia shape on the floor with painters tape. I told students that they would all run to the cornucopia and grab a word strip and that they DO NOT want a word strip with a cornucopia on it. Students who got a word strip with a cornucopia shape on it will compete in an extra competition, making it more likely to “die”. This little mini competition is to eliminate extra students so I can get down to 16 for the first bracket.  Count to three and laugh as you watch the kids run to get the good strips.

Now have everyone who DOES NOT have a cornucopia slip sit down. The others find their match. These remaining pairs face off with rock paper scissors, and one member of each pair dies. The winner captures the word slip from the dead tribute.

Next, the group ordered themselves by wordslips in the correct order of the mastery passage. Now we repeat the scripture mastery. Tomorrow I will have the dead people recite the entire passage, and the living tributes will lead the dead people by reciting their portion of the passage using their captured word strips.

The remaining 16 people fight off, and eight are eliminated and their wordstrips are captured. Everyone recites the passage again, with the 8 winners saying their part, and the dead peeps saying it together. I told the class this was like the song at the end of the day in the games.

Continued until we had a winner.  Our game took about 15 minutes, but I think it will go faster tomorrow because I/we know how to do it.

How to make the Word Strips

If you have 16+ students like me, you can use my bracket below to make wordstrips.

Otherwise, in order to know how many duplicate word strips to make, take the number of students in your class and subtract 4, 8, or 16, from it.

The remainder will indicate you how many double word strips to make. So if you have 11 students in your class, 11-8 = 3.  Using the bracket with 8 blanks, duplicate 3 of the phrases in the brackets.  You’ll now have 5 unique plus 3 pairs of duplicate strips.  The duplicates will pair off to fight before the rest so that you can eliminate your bracket down to 8 people. 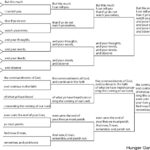