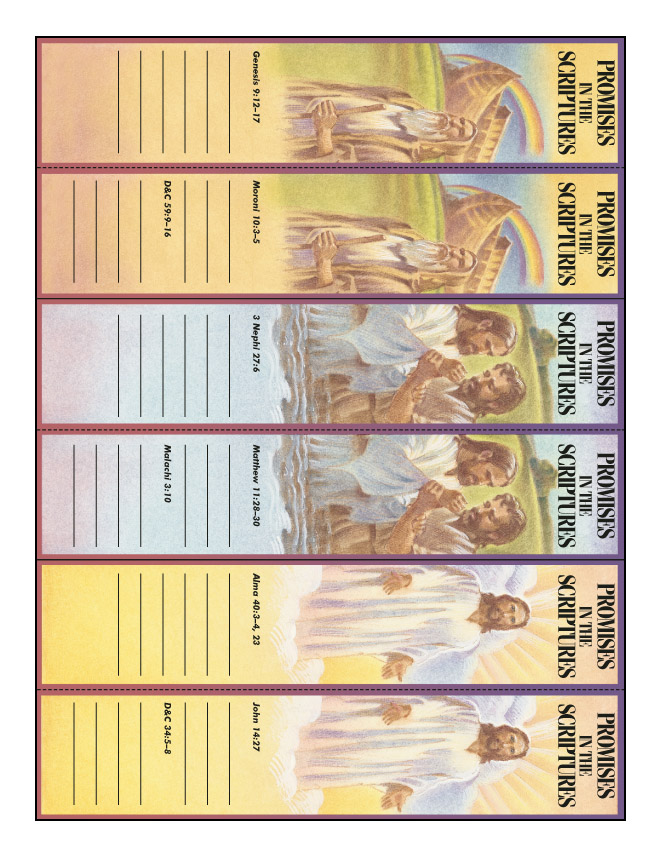 Mini Lessons
This page is formatted for printing
blog template

Promises in the Scriptures

Promises in the Scriptures
By Linda Magleby

There once was a young boy who had a very important question. He wanted to know which church was right so he could join it. He read a promise in the Bible in James 1:5: “If any of you lack wisdom, let him ask of God, that giveth to all men liberally, and upbraideth not; and it shall be given him.” The boy believed that promise. He believed that if he sincerely asked Heavenly Father which church was right, he would get an answer.

You have probably guessed that the boy’s name was Joseph Smith. He studied the scriptures and believed in the promise. He prayed and was given a wonderful answer—Heavenly Father and Jesus Christ appeared and told him not to join any of the churches. Joseph learned for himself that the promise in James is true, that a person who lacks wisdom can pray to Heavenly Father and receive an answer. Many answers will come not from a heavenly appearance but through the promptings of the Holy Ghost.

To make the bookmarks on page 20, mount the page on heavy paper, cut on the solid black lines, fold along the dotted lines, and glue backs together. Read each scripture and write on the blank lines the promise made. Keep these bookmarks in your scriptures as a reminder to read every day.

Promises in the Scriptures

Jenny Smith
Jenny Smith is a designer who started blogging in 2004 to share lesson and activity ideas with members of her home branch Mississippi. Her collection has grown, and she now single-handedly manages the world's largest collection of free lesson help for LDS teachers with faceted search. Her library includes teaching techniques, object lessons, mini lessons, handouts, visual aids, and doctrinal mastery games categorized by scripture reference and gospel topic. Jenny loves tomatoes, Star Trek, and her family -- not necessarily in that order.
ALL POSTS BY THIS AUTHOR

Jenny Smith is a designer, blogger, and tomato enthusiast who lives in Virginia on a 350+ acre farm with her husband and one very grouchy cat.

Check out some of the awesome stuff being shared on No Boring Lessons:
Answering questions about Race and Priesthood Ban
Jenny Smith
No Comments

After seven years operating the Seminary Teachers of The Church of Jesus Christ of Latter-day Saints Facebook group, I've seen it all. Too many of us are giving answers about race and priesthood intended to preserve faith that do not convey the truth, the whole truth, and nothing but the truth sohelpmegod. We know lot […]

What you need: FULL clear glass of water Lots and lots of paper clips GENTLY and SLOWLY place paper clip by paper clip in the very full glass of water. Have your students watch as the glass gets fuller and fuller but never topples over and spills everywhere. Relate how this can sometimes be like […]

From Jonna C - Print these cards on one side of a sheet of cardstock, so that the answers can't be seen through the back of the cards. SEMINARY SCRAMBLE RULES SET-UP 1- Set up your classroom with enough small tables (classroom tables work great), and 3-4 chairs at each table, to divide your class […]