Names from a hat

You know how this works: each student's name is written on a piece of paper. You draw a name out and that's the person who reads or prays next.

EXAMPLE: I use a bucket with craft sticks that have each student's name written on it. One end of the stick is red and the other is green. Students with red facing up, have been chosen. It's an easy way to remember who has already had a turn without having to keep track of a list. Students like that they can see they aren't being "picked on". I use it for randomly assigning prayers and keeping track of who has given prayers already. I have also used the bucket to draw names for scripture reading or sharing ideas as well.

It's easiest to use this method when a classroom's attendees don't change too much from week to week.  But if you're using it in adult Sunday School or Elder's Quorum, you could have students write their names down on a list at the beginning of class, have a volunteer cut it apart, and then draw the names from the hat. 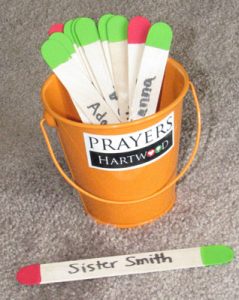